My relationship with Apple’s photo editing program Aperture was always a bit complicated, but generally we get along quite well (despite Apertures dooming end). However, sometimes the program is a bit too demanding: 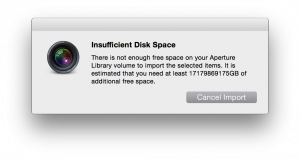 “There is not enough free space on your Aperture Library Volume to import the selected items. It is estimated that you need at least 17179869175GB of additional free space.”

17.179.869.175 GB is a little more than 17 exabyte. Out of curiosity I looked up what that kind of a number means. It is way higher than the number of stars in our galaxy Milky Way (100-400 billion stars). It is also more than four times bigger than the estimated size of the whole World Wide Web back in 2013. And if it had been real photos of about 30MB each (Canon RAW), that would have meant more than 573 million photos (phew). Fortunately Aperture guessed a little bit too high… 🙂