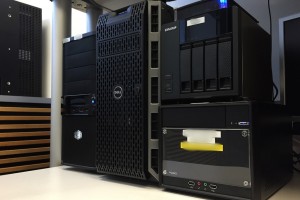 I’m a big fan of what can achieved with commodity hardware for free or little cost using virtualization platforms such as XenServer. Sure, ‘real’ server hardware has benefits. It is optimized to excel in certain disciplines. But ordinary gray box PCs are immensely flexible and for a scientist like me who plays with hardware configurations all the time, they are great. (They also save you money if you have the space for non-rack hardware btw.)

One thing where ‘real’ server hardware shines is remote management. Ordinary PCs typically do not have that. But most of the time they have a feature called Wake-on-LAN. This allows powering them up by sending a specially crafted ‘magic’ packet over the Ethernet. Fortunately, XenServer has built-in support to send those packets within a pool of servers and the Windows GUI XenCenter makes using that feature very convenient.