Apple has earned itself a name for producing durable computers. My MacBook is now 9 years old and while it still works fine, it has grown increasingly slow and has lately been spinning its fan up like crazy. Time to open the case and fix the issue. 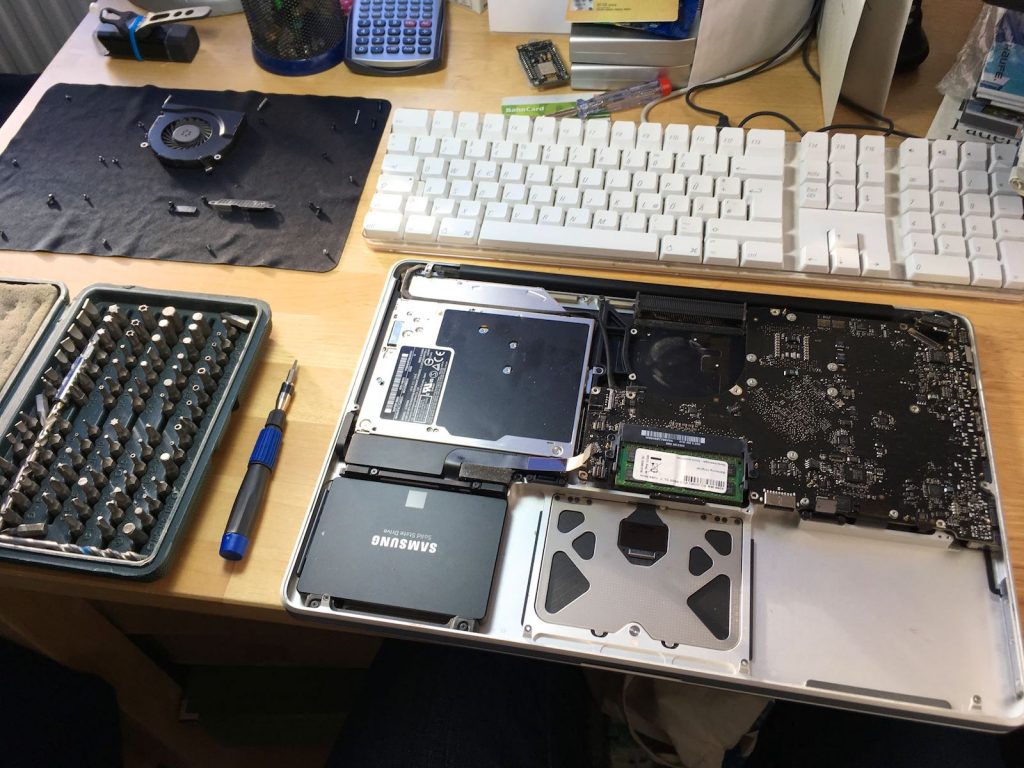 Over the years, the computer had not only gained an impressive age (for a portable electronic device), but also accumulated lots of dust inside and suffered from a deteriorating thermal conductivity of the thin layer of thermal grease that transfers heat from the CPU and GPU to the heat sink which, in turn, transfers it to the fan. While this degradation does not cause any damage, it makes the computer slower and louder as the system attempts to keep the chips’ temperatures down.

Solution: iFixIt has an excellent article describing how to disassemble this kind of Mac until it is possible to remove the heat sink. However, like other people, I got stuck with step 24 as the logic board could not be lifted from the case more than a few centimeters and seemed to stick somewhere on the right side close to the ports. As it turned out, the speaker component is covered in a sort of foam material which, over the years, got stuck to the case. With a credit card and a spudger, it was possible to carefully separate the two from the side while gently pressing up the logic board from the case. The foam did receive some damage but that speaker in its middle is not affected so that should not be a problem.

Finally, with the heat sink off, you can clean the remains of the original thermal paste with a soft paper towel and some spirit. Make sure that the surface of the chips and the heat sink is completely clean before applying new thermal paste. Here is a detailed description of how to do this.

Result of the procedure: The computer is substantially faster again, the CPU remains below some 88°C (before it reached 96°C before throttling kicked in) and my ears have to endure much less fan noise.