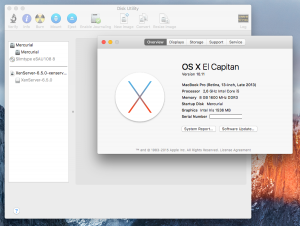 In Mac OS X 10.11 (“El Capitan”) Apple replaced the good old “Disk Utility.app” with a completely overhauled and colorful but less powerful version. Many features have been sacrificed in favor of an easier and more usable UI. This post explains how to get that old version back.

DISCLAIMER: Using an outdated version of a system utility bears a lot of risks and may result in the complete loss or corruption of your data. If you’re doing this, you are on your own and Apple will certainly not support you in a way. This is where the fun begins! 😀

I cannot provide the binary of the patched Disk Utility as a download since that would violate Apple’s copyright. Instead, I will explain how you can patch the file yourself:

You just changed a processor instruction in the application from JNE (Jump Not Equal, opcode 0F 85) to JE (Jump Equal, opcode 0F 84). Basically it is like this: Disk Utility checks if your system version matches its expectation. If this is not the case (= not equal), it shows a message and terminates. The patch above changes that check: The code now says that if the version does match the expectation (i.e. is equal), it will complain. In other words: This patched version of Disk Utility will not work on any system it was intended to work on, but will start just fine on any other.